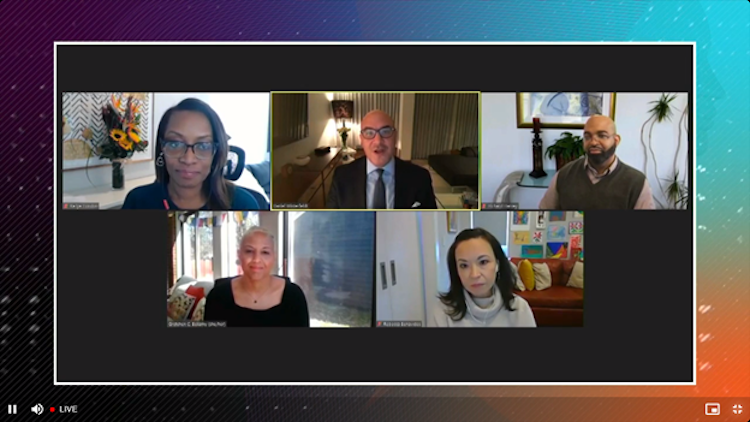 Panelists speak at the ABA Techshow 2021 panel called “Harnessing and Maximizing Technology and Data to Drive Diversity, Equity and Inclusion in the Legal Profession.”

While most lawyers are passionate about diversity, equity and inclusion, they still struggle with actions and tangible outcomes in this space, Daniel Winterfeldt said during a Monday afternoon ABA Techshow panel called “Harnessing and Maximizing Technology and Data to Drive Diversity, Equity and Inclusion in the Legal Profession.”

The good news is, there are existing solutions, such as the ABA’s 2020 Model Diversity Survey Report, that can help move the needle forward, added Winterfeldt, a partner in Reed Smith’s global capital markets practice in London and the founder of the InterLaw Diversity Forum.

The survey, released in February by the Commission on Racial and Ethnic Diversity in the Profession, is the first ABA report on diversity, equity and inclusion in law firm practice. It is based on three years of data and a product of Resolution 113, which was adopted in August 2016 to urge legal service providers to create opportunities for diverse attorneys and buyers of legal services to direct a greater percentage of their legal spending toward diverse attorneys.

The survey also found that male and female representation was about even at the associate level, but men comprise 70% of nonequity partners and 80% of equity partners.

Gretchen Bellamy, the president and consulting director of Bellamy Management Consulting in Fayetteville, Arkansas, who also serves as a special adviser to the commission, explained that the survey first appeared as a paper spreadsheet, but it is now available via two online platforms to law firms and signatories—the companies who agreed to help the ABA promote diversity in the legal profession.

“Signatories can see all of the information that is aggregated for law firms,” Bellamy said. “They can go in and compare, we’ll use Daniel’s firm Reed Smith to White & Case, or they can just print out those reports. And that’s how the conversation gets started.”

Follow along with the ABA Journal’s coverage of the ABA Techshow 2021 here.

Winterfeldt, whose InterLaw Diversity Forum seeks to promote meritocracy and inclusion for diverse groups in the legal sector, heard Bellamy speak about the Model Diversity Survey and decided he wanted to introduce a similar survey in the United Kingdom.

He discussed the need to create actual solutions and track outcomes rather than simply paying lip service to diversity, equity and inclusion, or what he called “jazz hands diversity.”

“We need a system that is a turnkey solution that is low-cost, accessible to everyone, that will create transparency, because I feel like in the past five years, what we’ve seen is shifting to a lot of activity in the D&I space but not necessarily the things that are outcomes-focused,” Winterfeldt added.

He said he will help replicate the Model Diversity Survey system and platform, and already has preliminary signatories.

Rebecca Hernandez Benavides, the director of legal business & strategy at Microsoft in Redmond, Washington, spoke about the importance of data and how it creates awareness of the need to make more progress in diversity and inclusion.

“I think we’ve made some progress, but I think everything points to the fact that we are not making it nearly as fast as we need to be,” Benavides said, agreeing with Winterfeldt that there needs to be more than just the “jazz hands” and a focus on what is actually being done.

In April 2020, the ABA announced a partnership with Microsoft and others to launch the online platform allowing participating organizations to easily access information provided by law firms that completed the ABA Model Diversity Survey.

Kellye Gordon, the vice president of ethics and compliance and legal operations at VF Corp. in Denver, also joined the panel and discussed how her company benefits from the Model Diversity Survey. She pointed out that she and other business leaders were struck by the commitment from general counsel nationwide to advance Resolution 113 and realized they wanted to be counted among them.

She added that her core team is small and doesn’t have time to create its own survey to evaluate legal service providers.

“When we looked at the ABA survey, we realized it provided us with exactly what we needed,” Gordon said. “We were drawn by the ability to have access to this uniform, consistent data. It promotes this essence of transparency that we were looking for, and it also aligns with our values because it promotes that cultural shift.”

Richard Harvey, a professor of psychology at Saint Louis University who conducts research related to diversity, equity and inclusion, helped with the Model Diversity Survey. He discussed some of its findings, particularly those related to a diversity “bottleneck.”

It also found that racial minorities that are promoted to partnership are leaving law firms at a disproportionately higher rate.

Harvey encouraged the audience to use the ABA’s data to advance diversity, equity and inclusion in their own law firms.