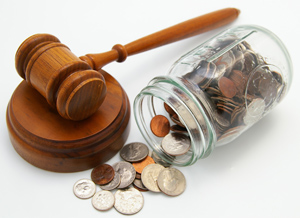 A federal appeals court has ruled against an upstate New York doctor, who says she spent at least $60,000 to fight a $50 fine for creating too much noise in a federal courthouse.

The 2nd U.S. Circuit Court of Appeals at New York ruled Nov. 3 against physician Marina Wasylyshyn. The appeals court ruled that the noise regulation was not unconstitutionally vague as applied to Wasylyshyn’s conduct.

Wasylyshyn, a surgical oncologist, told the New York Daily News in May 2019, when her case was argued, that she had spent $60,000 in legal fees as a matter of principle.

Wasylyshyn was convicted under a regulation that bans anyone on federal property from creating a “loud or unusual noise or a nuisance.” The conviction stems from a confrontation with two courthouse security officers Feb. 14, 2017, at the federal courthouse in Binghamton, New York.

Wasylyshyn told the New York Daily News that the guards were “gruff and rude,” and their behavior was “very condescending and frankly sexist.”

Wasylyshyn had entered the courthouse to get tax forms from a self-service rack. But the court security officers told her that she couldn’t go to the IRS office without an appointment because of a new policy. Also, a protest was gathering outside, and the security officers were unsure whether Wasylyshyn was a protester.

Wasylyshyn then “engaged in a loud argument” with one of the guards that was “aggressive on both sides,” the 2nd Circuit opinion said. After a security officer offered to pick up the forms that Wasylyshyn needed, she slammed her purse on the counter and searched for a list of the forms that she wanted.

One of the guards told Wasylyshyn to calm down, and the other pointed a finger close to Wasylyshyn’s face. Wasylyshyn said she was a doctor, the guards were public servants and she pays their salary.

As one security guard headed to the tax form rack, Wasylyshyn continued to yell, the appeals court said.

The other security guard walked out from behind the counter, approached Wasylyshyn and pointed at her face. She backed away, then stopped and stepped toward the guard, thrusting her face toward his. The guard testified that Wasylyshyn made contact in “kind of a belly bump.”

The guard arrested Wasylyshyn, then handcuffed her. She asked why she was under arrest, and a guard replied it was for “being a b- – – -.” The other guard clarified that she was being arrested for disorderly conduct. She was later ticketed for violation of the noise regulation.

Wasylyshyn was convicted by a magistrate judge in a bench trial. She challenged her conviction on three grounds—all rejected by the appeals court.

First, Wasylyshyn argued that the noise regulation was not conspicuously posted at the courthouse, and she was not on notice that the conduct was illegal. But the appeals court said Wasylyshyn failed to raise the issue in her initial appeal to the district court, and she had forfeited the argument.

Second, Wasylyshyn argued that she didn’t satisfy the mens rea requirement of the regulation because she didn’t have knowledge that her action was wrongful. The appeals court said only a general intent was required. That meant that Wasylyshyn only had to know that her conduct was likely subject to regulation based on facts that would create that expectation in a reasonable person.

“Courthouses are formal spaces where solemn government business takes place; a reasonable person would understand that shouting at security officers in a courthouse is a ‘non-innocent act,’ likely subject to some form of regulation,” the appeals court said.

Finally, Wasylyshyn argued that the regulation was unconstitutionally vague. The appeals court disagreed.

“In this particular setting, reasonable people can discern with relative ease whether a noise is ‘loud’ or ‘unusual’ and whether conduct constitutes a nuisance,” the appeals court said. “We have little doubt that, inside a federal courthouse, a reasonable person would discern that ‘yelling’ at a [courthouse security officer] constitutes creating a ‘loud noise.’ ”

Hat tip to Law360, which covered the opinion.