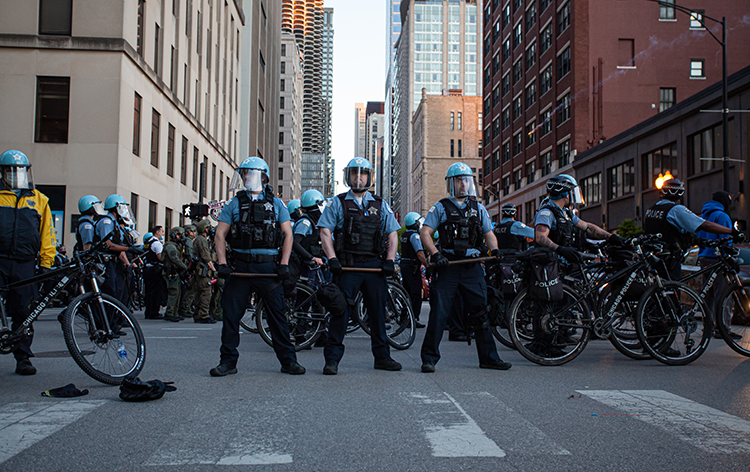 Chicago police are deployed during a march for justice for George Floyd. Photo by Dominique Robinson / Shutterstock.com.

As thousands of demonstrators have been arrested or jailed amid protests over the killing of George Floyd and police brutality, detention practices that increase the risk of spreading the novel coronavirus are back in the spotlight.

Attorneys and civil rights groups have filed lawsuits over police tactics against protesters, which have included the use of rubber bullets, pepper spray, tear gas and batons. In Los Angeles, Black Lives Matter activists sued the city’s police department in early June alleging that officers had detained 2,600 peaceful protesters in large groups, handcuffing and placing them on buses for hours at a time, without access to food, water or bathrooms.

Before Floyd’s killing on May 25 in Minneapolis sparked protests across the country, attorneys had taken legal action against some of the nation’s largest jails. Several pending lawsuits take aim at officials for violating the civil rights of nonviolent pretrial detainees and vulnerable inmates, claiming they are creating a public health crisis that could endanger the wider community.

Dan Stormer, a partner with Hadsell Stormer Renick & Dai in Pasadena, California, is behind a state court lawsuit challenging conditions for pretrial detainees and other inmates in Los Angeles County Jail. He says he is certain that police tactics and detention practices during the protests could increase the risk of spreading COVID-19.

“There’s no need to confine everybody in such close quarters. These are not violent people; these are, for the most part, peaceful protesters. Why do you have to put them all on the same bus? Why do you even need to handcuff them?” Stormer says.

At least 10,000 people were arrested during the first 10 days of the protests and unrest across the U.S., according to an Associated Press tally in early June, many of them for nonviolent offenses, such as violating curfews and failing to disperse. In Chicago, more than 3,000 people have been arrested for civil unrest and disorderly conduct. Police have arrested more than 2,000 people in New York and almost 3,000 people in Los Angeles.

The legal claims against jails have resonated as protesters have been detained for long periods, reportedly in cramped and unsanitary conditions.

Corey Stoughton, an attorney at the Legal Aid Society in New York, says police were holding demonstrators in precincts and processing centers for up to 24 hours and in some cases longer, and that her clients have reported up to 20 people being held in 5-by-8-foot cells. She also says many officers have not been wearing masks and detainees do not have access to soap, water or hand sanitizer.

“Conditions in those holding pens that are in those precincts and arrest processing centers are abysmal,” Stoughton says.

Stoughton says the “vast majority” of demonstrators police arrested and detained do not end up at Rikers Island, the city’s main jail, unless they have been charged with a more serious offense, such as looting or assault. Most are not even arraigned but are released with a desk appearance ticket, which means they will appear in court at a later date, she says.

Jails’ high turnover rates, with many people entering and leaving the system every day, also increase the risk of worsening the spread of the disease as those people are released back into their communities, experts say.

The protests themselves even pose a threat. Officials and public health experts have cautioned that assembling in large crowds could worsen the spread of the virus, particularly as protesters and police officers have been observed shoulder to shoulder and not social distancing. But experts also say that being outdoors could reduce the possibility of transmission. 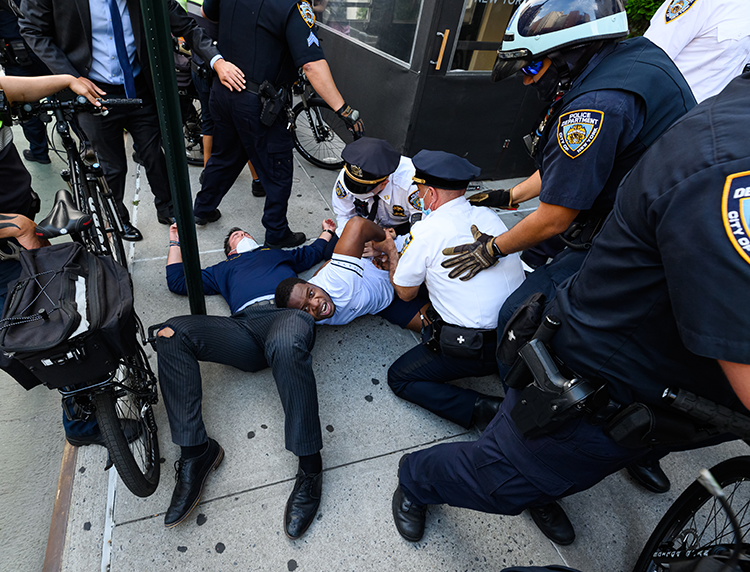 New York Police Department officers arrest a protester in Union Square during a rally responding to the death of George Floyd. Photo by noamgalai / Shutterstock.com.

University of Michigan law professor Margo Schlanger adds that detainees have a right to reasonable conditions under the Fourth and 14th amendments.

“I would say that putting people in detention who don’t need to be there, forcing people into close quarters and taking away their masks and other self-protective equipment is not reasonable,” Schlanger says.

Since February, jails have released thousands of inmates, including pretrial detainees and people who had been convicted of nonviolent crimes. But Stormer says that jails are still overcrowded.

A paper for the Journal of the American Medical Association Internal Medicine, which opens by noting outbreaks at Rikers Island and Cook County Jail in Chicago, states that when jails “are unable to adhere to measures needed to contain and mitigate a viral epidemic, incarcerated persons, staff, and the wider community are endangered.” In addition, to making sure there is protective equipment, testing and medical care, the best way to fight the virus inside jails is to “drastically reduce” the population, the paper states.

A peer-reviewed paper, “Incarceration And Its Disseminations: COVID-19 Pandemic Lessons From Chicago’s Cook County Jail,” published at HealthAffairs.org, suggests that cycling pretrial detainees in and out of jail “is a significant predictor of SARSCoV-2 infection.”

The study says 15.9% of all COVID-19 cases in Chicago as of April 19 could be linked to the booking and release of detainees in Cook County Jail, one of the largest in the nation. The researchers used data from the Illinois Department of Public Health, Cook County Jail and zip code data.

The Cook County Sheriff’s Office called the study a “fantasy filled with assumptions bordering on lies.”

Although the Cook County Jail was once a hotspot for the virus, the sheriff’s office says as of June 15, 27 detainees had tested positive for COVID-19 at the jail, as had 33 jail staff members. Seven detainees who tested positive, as well as two correctional officers and one deputy have died. Officials have shrunk the jail’s population since the pandemic took hold. As of June 16, it was 4,525; on March 1, the jail population was 5,604.

The Cook County Jail study covers the booking and release of detainees in March. One of the paper’s authors, Eric Reinhart, a medical student at the University of Chicago Pritzker School of Medicine, says the spate of arrests and detentions risk spreading the virus.

“It’s not just about conditions in the jail. When you arrest all these people and you cycle them in these huge waiting rooms both for booking and release, even if you release them 10 minutes later, the risk is huge,” Reinhart says. “All those people are being transported, often in groups. They’re waiting in rooms to be booked and processed in large crowds in indoor facilities.”

Cook County Health said the authors used “limited data they obtained to support their personal views on incarceration and detention practices in our judicial system,” and found the “methodology, analysis and conclusions of this study both incomplete and irresponsible.”

The sheriff’s office and Cook County Health said the authors never contacted them before publishing the study.

The U.S. has the highest pretrial detention rate in the world, with almost half a million people detained on any one day, according to a 2018 study by the American Economic Review. Many detainees are jailed because they can’t afford to pay bail. Researchers found that typical detainees earned less than $7,000 in the year before they were arrested.

The pandemic has exposed fissures in the justice system that disproportionately affect communities of color. In an October 2019 article, the Prison Policy Initiative found that national data on how racial disparities might have changed was “limited and outdated.” But between 2002 and 2017, pretrial prison populations had more than doubled.

Overcrowding and conditions at jails are the focus of COVID-19 related lawsuits in Cook County in Illinois, Los Angeles County and Harris County in Texas.

Stormer filed a class action lawsuit against the Los Angeles County Sheriff’s Department in April arguing that conditions inside the jails are unconstitutional and endangering the public health. The lawsuit is now pending in state court.

Harris County Judges in Texas sued Governor Greg Abbott in April for issuing an executive order that prevented them from following health experts’ advice by reducing jail populations. That included the suspension of any statutory limits on how long officials can lock up pretrial detainees.

In Illinois, civil rights attorneys and advocates filed an emergency class action lawsuit against Cook County Sheriff Thomas Dart in early April demanding he release detainees with medical conditions who are most vulnerable to the virus.

U.S. District Judge Matthew Kennelly ordered Sheriff Dart in late April to test detainees who show COVID-19 symptoms or have been exposed to people who are sick. The judge also barred the use of bullpens and cells with more than one occupant for new detainees at intake, among other measures.